Concerned about our Club’s re-branding, I sent this e-mail – in a personal capacity – to our National Chair and our Chief Executive Officer:

You have announced that you will be going ahead this week with the rebranding of the Cyclists’ Touring Club.

To do so would be profoundly undemocratic.

This is because you have received a petition – some weeks ago – signed by a sufficient number of members of the Cyclists’ Touring Club to demand a poll of the whole Club on this issue.

I therefore call upon you to:

Yours in a spirit of democracy and transparency,

Thursday Night’s Ride to Southend-on-Sea and a great description from Skirtbike!

For those that don’t know there is a group of people that have been riding out of London to a coastal resort most months of the year, aside from the deepest darkest winter ones, for maybe ten years now.  I forget when they first started, as I wasn’t on the first couple. A very good friend of mine told me about them and their leader, Simon, who is a character and a half I can tell you.  I think it was sometime in 2008, or maybe 2009.  Simon has done a lot more in his life than the Friday Night Rides, but they remain the bit in which I was most involved over the next few years.

So, back to the FNRttC.  Well, yes, my good mate took me along, introduced me to Simon, the leader and a few other people and so it started.  Although Simon ran them every…

Hey winter, stop bossing me around. It’s time for a March challenge designed for the utility cyclist and transportation runner with errands to do, even during cold winter days– the Errandonnee!

Particularly good to see the acknowledgement of Peter Mulligan!

The town of Northampton, in England’s southern midlands, is an unlikely place to find a Joyce connection. Yet one of its cemeteries – Kingsthorpe – is the final resting place of Lucia Joyce, the tragic daughter of James and Nora.

Postwar Trieste, Lucia’s birthplace, had been claimed by Yugoslavia which is why her grave is located in the eastern Europe section of the cemetery and surrounding  headstones are inscribed in many of the Slav languages. Lucia’s says, simply: “Lucia Anna Joyce, Trieste 1907, Northampton 1982.”

Her mental disturbance, thought to have been schizophrenic (one doctor noted she was neurotic rather than lunatic) started to manifest itself when she was in her early twenties and the resultant erratic behaviour and violent outbursts made her difficult to live with. She severed the phone lines in her parents’ apartment at a most inopportune moment – just when the…

A great account, with terrific photos, of our trip across France for which I was white-van-man.

Here we are at the Pegasus Bridge just north of Caen, where we had our first breakfast.

It’s possible to see how the weather treated us from the photos and, frankly, it was pretty amazing most of the time. Following a really hot spell as far as day 8 (south of Issoire), we had a couple of drizzly days, with a brief spell of harder rain before it all cleared up and we enjoyed near perfect conditions for the rest of the trip. Only…

On Sunday 8th September the group left St-Paulien for elevenses in Le-Puy-en-Velay and then began a series of steady climbs to Coubon, near the source of the Loire, and to Le Monastief for lunch. More climbing took them over the boundary between Auvergne and Rhone-Alps and into the Ardèche for an afternoon break at Le Beage. Then along beside lakes and reservoirs to our hotel at St-Cirgues-en-Montagne.

Just time for a personal ride upto the Atlantic-Mediterranean watershed before dinner. 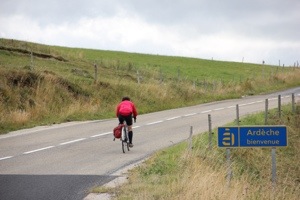 Thursday 5th September saw us make an early start – on the road at 8 a.m. from Montluçon to Orcines. Beautiful scenery in the Auvergne as we left Allier and entered Puy-de-Dome. Morning coffee at Pionsat (near Chez Suzanne), lunch at St-Gervais-d’Auvergne, nice hotel under the Puy-de-Dome and overlooking Clermont-Ferrand – the Hotel Relais des Puys.

Straightaway on arrival at the hotel, Mark Waters (formerly Touring Officer with the CTC) suggested that he and I tackle the Col de Chayssat, the highest point you can legally ride a bicycle to the summit of Puy-de-Dome. Job done at 1,078 metres!

Friday was a bit of a rest day for both the riders and the van-man. Beautiful scenery and beautiful weather. Coffee at St Saturnin – where I spotted a bike shop in a house basement, completely unsigned – lunch in the market square of Champeix and an early arrival at the Hotel Paribou in Issoire.

This meant that I could go pedalling – a lovely 40-mile ride up through the forests to St-Catherine-de-Fraisse and a fast sweeping downhill return on the main road. Excellent!

Saturday saw the riders take a hilly, lengthy and very wet ride from Issoire. The rain started well before St-Catherine but I managed to pursuade the village restauranteur to offer the riders hot drinks! The rain cleared for lunch at St-Alyre-d’Arlanc but came back with a vengeance between there and La-Chaisse-Dieu and it reached Old Testament proportions on the road to St-Paulien! This would be my rest-day from my usual evening ride!

Sunday was less wet! A quick descent from St-Paulien to Le-Puy-en-Velay for elevenses; a steady ascent to Le Monastier for lunch; a climb over the boundary between Haut-Loire (Auvergne) and Ardèche (Rhone-Alpes) to Le Beage and the day finished at St-Cirgues-en-Montagne. My evening ride was up to the Atlantic/Mediterranean watershed! 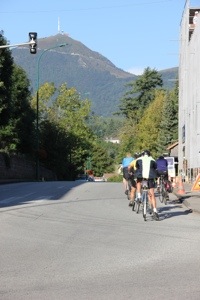 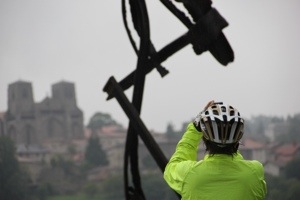 Monday 2nd September was another good day. Good breakfast, then a visit to a Leclrc hypermarket to buy water (and a track pump) for the group. Onto St Calais for elevenses, Montoire-sur-le-Loir for lunch, and Herbault for an afternoon Orangina. Then into Blois for the Tintin-orientated Hotel Le Monarque. Personal ride in the evening out of the city to the southeast towards Chambord.

Tuesday started from Blois, coffee at Milançay. Then one of the cyclists was laid low with a dreadful toothache. So lunches distributed to those with panniers and two of us drove directly to Issoudun. Hotel receptionist rang local dentist, appointment made, teeth examined, prescription written and collected from pharmacist. Then back to Graçay to meet the group. A personal evening ride to Indre-Cher departmental boundary.

Wednesday started with very hot weather. Lignieres, which I’d visited in the rain two years ago, looked very different. Along to Cuban but we didn’t stop at THAT bar. Afternoon break in Domeroy. And then a little shopping as we entered Montluçon. A hilly evening ride towards Marçillat.

Two years ago, I pedalled across France from Caen to Cannes (C2C), La Manche to La Mediterranėe, on a CTC tour, and enjoyed it so much – and got on with the leader, Bob Norton, so well that I volunteered to drive the support vehicle for this year’s tour. I’d had a week’s van-man experience with The Fridays on LonJoG and knew I’d love it.

So last Thursday saw me packed and prepared. Packed in a rucksack as I was going to take my new Bianchi with me!

After a slow pedal to Northampton station, I caught a punctual train to Euston. Then, after an easy pedal to Victoria, I caught a train to Portsmouth.

I used my new Garmin to navigate from Fratton station to Hilsea Travelodge and met Bob and George (deputy leader) and Georgina ( the boss). After a drink and a meal in the local Italian restaurant (the owner was quite a big Pompey fan), it was early to bed.

Bob, Georgina and I were up early on Friday to catch the early ferry. Breakfast and lunch on the boat. We the cycled to Caen to pick up the van from Europcar. Back to Ouistreham for dinner in the hotel (pigs’ cheeks in ossambuca sauce washed down with cider fermier).

We met the cyclists off the late ferry, beers and bed.

Saturday was first proper van day from Ouistreham to Argentan, with breakfast as Pegasus Bridge, elevenses at Argences, and a picnic lunch at Courcy. Accommodation at Hotel des Voyageurs in Argentan. Dinner was pork à la Normande and tarte framboise.

I then fitted in a personal ride to Sėes an return – 32 miles.

Sunday began with a good breakfast at the hotel. Elevenses followed at Sėes and lunch at Mamers. I drove to the hotel on the outskirts while the cyclists went to a town centre bar. I walked in to join them before going on a short personal ride to Lamnay and back, about 11 miles. Dinner at the hotel: mixed salad, chicken and pasta, and tarte des pommels..

Up Hill And Into The Wind
Blog at WordPress.com.
Loading Comments...