On Friday evening, I had planned to go to the Fridays’ LonJoGers Reunion in Clapham.  Train ticket had been booked well in advance for the 1725 from Northampton to Euston.  The train system, however, wasn’t playing along – the overhead cables at Hanslope, just north of Milton Keynes, had become dreadfully tangled – like a kitting playing with a  ball of wool.  Where coach travel could be laid on, there were coaches from Northampton to Milton Keynes – but the train service south of MK to London was dreadfully disrupted.  And there were coaches (albeit only a few) from Northampton to Wellingborough to catch the unaffected service into St Pancras.

Brompton to the rescue.  It was a simple decision to pedal from home to Wellingborough station – and this had the added attraction that the route would take me near the site of the first LonJoGers’ breakfast at Wellingborough Tesco.  I didn’t eat another breakfast but did catch a quiet and efficient train into St Pancras.

A short pedal took me to Stanford’s in Covent Garden to buy a couple of maps for an Italian adventure in early May.  And then I was pedalling on to Clapham via Waterloo Bridge, the Elephant & Castle and the Cycle Superhighway that is the broad blue line painted down the A3 (Kennington Park Road and Clapham Road).  This is the most used of Boris’s Superhighways and, at six o’clock on a Friday evening I was witness to its use by dozens and dozens of cyclists.

Clapham Park Road was easy to find and then eventually The Coach & Horses just after the road took a left turn.  And an excellent reunion it was – hosted by Simon and Susie.  Shepherd’s pie, prosecco and lashing of Wandle, the locally brewed ale. 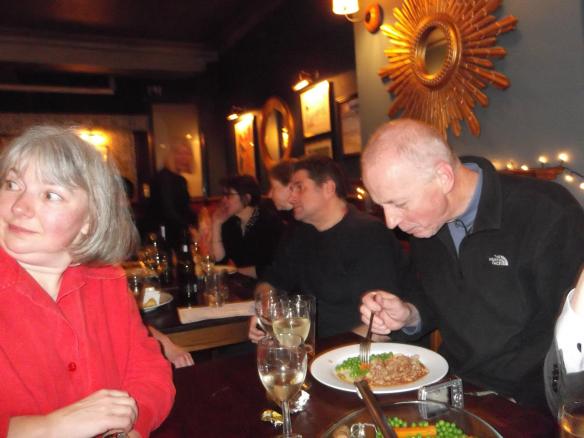 And plenty of catching up with friends from the great LonJoG adventure.

That’s Olaf in the background

and Xi looking at the camera.

The evening rushed by; farewells were made; and I set off for Twickenham where I had a bargain room (£19) at the Premier Inn.  Further pedalling along the A3, but very shortly onto the A205 and then the A305 into Richmond and then out the A305 Staines Road through Twickenham.  A huge room, a comfortable bath and a comfortable bed.

On Saturday morning, the Brompton re-traced its route along the A 305 to Richmond Bridge. 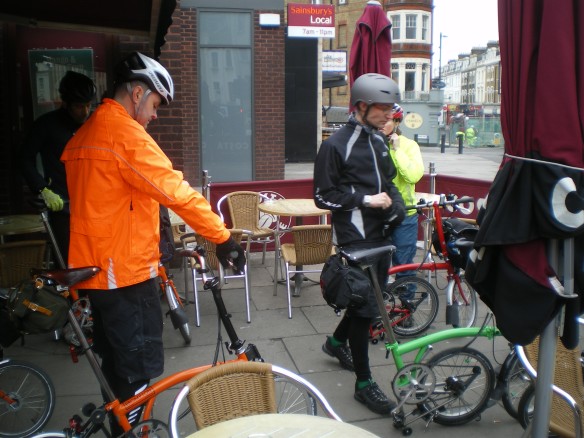 You may recognise John, Mr O, who blogs as Orange Brompton.  Anyway, we were marshalled by David Parkinson who was to lead the group out into Surrey and a climb of Box Hill.  First, elevenses at Headley Village Hall:

A beautiful descent from Headley to the foot of the Zig Zag Road gave us an indication of the task ahead: 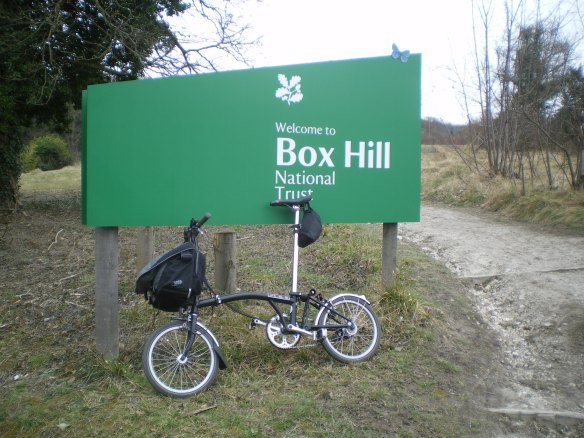 a task which everyone accomplished in good humour.  Here we are at the National Trust café at the summit 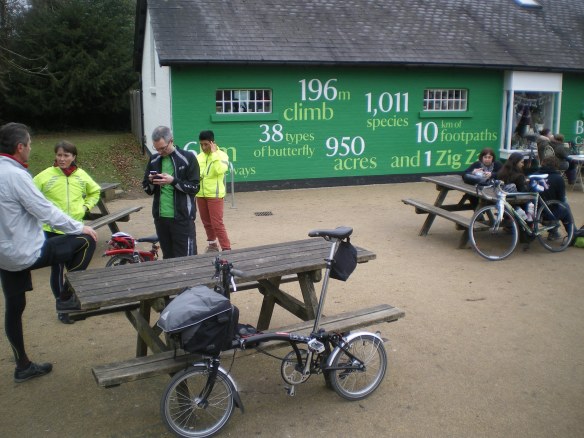 and, two hundred metres further along, a spectacular view south

On the way back to Richmond we met Alasdair, a man who takes personalising his Brompton to an extreme 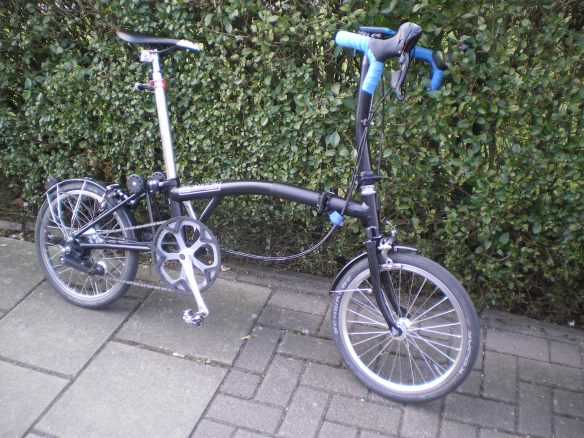 We entered Richmond via the Thames Path.  Here we are opposite Eel Pie Island

Leaving Richmond I made it a point of honour to pedal back to St Pancras following the A205 again and then heading for Putney Bridge.  New King’s Road was very busy (some unimportant football match) so I made it through Chelsea, Sloane Square, Knightsbridge, Hyde Park Corner and what I think is the quickest route – up Park Lane, Edgeware Road and Euston Road to the station.

At St Pancras, East Midlands railway staff told me the west coast line had been untangled so I retraced the route to Euston.  A fairly quick train back to Northampton station and I pedalled home.

Here’s a link to the Endomondo recorded route from St Pancras on Friday evening back to St Pancras on Saturday evening.  It comes out at just over eighty miles.  Add ten miles from home to Wellingborough station and four miles from Northampton station to home and the Brommie reached a total of 95 miles on its little adventure.