Proper bike ride today! 56 miles with CTC Northampton – ably led by Eleanor. 61 miles door-to-door. Met at Moulton; no stops to Oundle; lunch at The Women’s Tour start; no stops to home. On the Bianchi, very pleased.

I break off from the accounts of The Fridays in Normandy to tell you about yesterday’s Audax from Oundle (Northamptonshire).

Organised by Richard Daniells on behalf of CTC Northamptonshire & Milton Keynes – and within the rules of Audax UK – this was a 100k event starting and finishing at the Joan Strong Centre in Oundle.  I was bang on time with my preparations for the start  and so didn’t have any spare time to count the number of participants, let alone say hello!

Riders were responsible for finding their own way, following a detailed route sheet.  Naturally, everything looks better in good sunshine but the route was actually delightful.  And the instructions were very accurate.  To ensure the route is followed there was one manned control (at Grafham Water) and three information controls – where you answer a simple question based on observation at  junctions.  It’s not a race; it’s a tour within certain time limits.  Today, the time limits were to complete the route between 3 hours 22 minutes and 8 hours 5 minutes.  No racing, no places, just touring.

The first part took riders out from Oundle to Grafham Water, going east and south.  There was an early information control at Lutton less than 10k from the start and by that time riders were well spaced out.

Then the high point for me of the route: pedalling through Little Gidding, the hamlet that gives its name to the title of the fourth of T S Eliot’s great last set of poetry, “Four Quartets”. 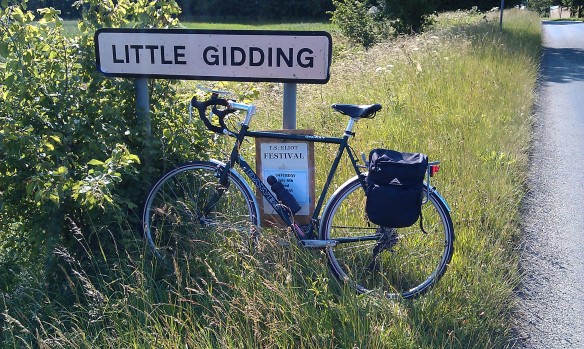 And there was the smallest of boards advertising an Eliot Festival over the weekend, presumably at the house associated with the seventeenth-century Anglican community established by Nicholas Ferrar.  It must have been cycle touring through the hamlet, on a journey from Oundle, that inspired Thomas Stearns Eliot to write (“Little Gidding”, section 1, lines 21-23):

Anyway, it wasn’t long and I was at Grafham Water, meeting up with friendly faces and enjoying beans on toast to propel me through the second half of the ride, west and north back to Oundle.  Two information controls on this part – the first just before Keysoe and the second in Riseley – before joining the River Nene at Aldwincle and cycling that lovely part back to Oundle.

Which of course inspired the poet to write (“Little Gidding”, section 5, lines 1-3)

What we call the beginning is often the end
And to make an end is to make a beginning.
The end is where we start from.

The poem culminates of course with the motto of the cycle tourist (“Little Gidding”, section 5, lines 26-29)

We shall not cease from exploration
And the end of all our exploring
Will be to arrive where we started
And know the place for the first time.

A great day out!  You can find my route here.  I completed the route, including my refreshment stop at Grafham Water in 5 hours 15 minutes.  The time on the bike was 4 hours 22 minutes.